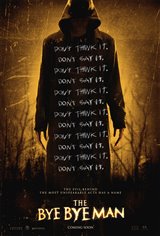 When three college students move into an old house off campus, they find a Ouija board. While playing with it, they receive messages from "The Spirit of the Board" -- an entity who claims it has never lived, but it acts as an interlocutor between other entities and the students.

The students ask to speak with someone who once lived, whose existence they can verify. Despite warnings from the Spirit that this could be dangerous, they persist. They discover a sinister entity who is not only human, but still alive. The Spirit tells them about the entity, known as the Bye Bye Man, who now that they know about him, is on the way to visit them. When he arrives, the friends try to save each other, while keeping the Bye Bye Man's existence a secret to save others from the same fate.

Based on the short story "The Bridge to Body Island" by Robert Damon Schneck.