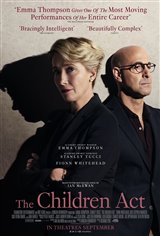 Just as she has a critical decision to make in the legal case of conjoined twins who need to be separated or they will die, High Court judge Fiona Maye (Emma Thompson) finds her marriage to Jack (Stanley Tucci) is in crisis. Because she never has time for him, he's decided to look elsewhere for affection.

Meanwhile, another critical case is put before her — that of Adam (Fionn Whitehead), who has refused a blood transfusion that could save his life, because he and his parents are Jehovah's Witnesses.

She goes to see Adam in the hospital to get his side of the story and finds him to be an exceptionally bright, special 17-year-old boy who loves music and poetry. She finally makes a decision in the case, but it's one that brings complications into her orderly and very full life.