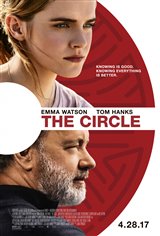 A young woman (Emma Watson) is in a dead-end desk job chasing down customers for payments. That is, until she gets offered a position with the world's most powerful internet company. With her father (Bill Paxton) falling ill due to Multiple Sclerosis, the company offers to put her parents on their health plan. But the seemingly altruistic company is not being completely honest.

However, all is not as it seems as she soon finds her life beginning to unravel after the company's founder, Eamon Bailey (Tom Hanks), pressures her to step in front of the camera and give up the private and normal life that she’s known.

Based on the bestselling novel by Dave Eggers.