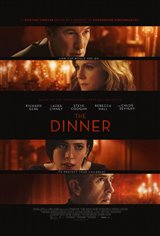 Paul Lohman (Steve Coogan) and his wife Claire (Laura Linney) get together with Paul's older brother, Stan (Richard Gere), a U.S. congressman who is running for governor and his trophy wife, Katelyn (Rebecca Hall), for dinner and drinks at a fancy restaurant.

Although their conversation starts off as relatively polite, as the evening wears on, Paul, a former high-school history teacher who feels like a loser in the shadow of his older brother, can’t stop making cracks about the waiters and the pretentiousness of the restaurant.

However, they have gathered together for a reason. Their sons, who were both drunk at the time, went to an ATM booth where a homeless woman was sleeping inside and did something unspeakable. Although they haven't been caught for their crime, an anonymous video clip of it (in which they can't be identified) has been posted to YouTube. Even though it could ruin his political career, Stan thinks their sons should go to the police and give themselves up, but the women disagree.

Adapted from the bestselling novel by Herman Koch.