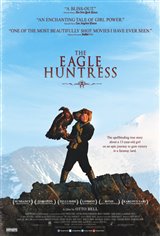 The film follows the epic journey of Aisholpan, a 13-year-old girl who has a fascination with her father's and grandfather's practice of hunting with a golden eagle. She wants to follow in their footsteps, but the role has predominantly been given to men.

One day, her father allows her to capture a golden eagle chick, which she trains in order to compete against 70 much more experienced men in an annual competition, and become the first female in 12 generations of her Kazakh family to become a master eagle hunter.