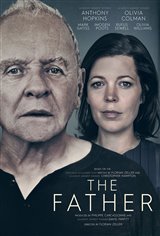 A former engineer, Anthony (Anthony Hopkins) doesn't want to leave the luxurious London flat where he's lived for many years. When his daughter Anne (Olivia Colman), who lives with him, announces she's leaving to live in Paris with Paul (Rufus Sewell), Anthony worries about what will happen to him.

Anne worries as well, because her father is showing signs of dementia. Sometimes he's perfectly fine, but other times he doesn't know who she is. He also sees a man he doesn't recognize in his flat, who says he lives there. Anne decides to hire a nurse named Laura (Imogen Poots) to take care of him, but despite Anthony's initial positive reaction to her, he vows he doesn't need a caregive and can take care of himself.

However, when he can't find something, he asks Anne if he's in his own flat, because it suddenly looks different to him. He even becomes suspicious of Anne, wondering if she's playing tricks on him to make him believe he's not all there.

Based on the play by Florian Zeller, who directed this movie.