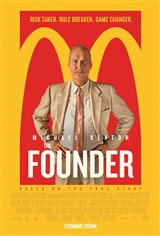 The true story of how small-time salesman Ray Kroc (Michael Keaton) met brothers Dick McDonald (Nick Offerman) and Mac McDonald (John Carroll Lynch) when he was selling them a large order of mixers for the small restaurant chain that they'd started on their own. Impressed by the brothers' speedy system of making and serving the food, he sees the potential to make a highly profitable franchise.

He manages to talk the brothers into letting him get involved, but the three soon find themselves having disagreements. When they don't approve of his ideas, such as making milkshakes from powder, he gets frustrated and eventually manages to pull the company out from under them, despite opposition from all sides, including his wife Ethel (Laura Dern). However, he goes on to eventually create the billion-dollar McDonald's empire.