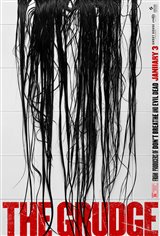 A twisted new take on 2002 Japanese horror film Ju-on: The Grudge, written and directed by Takashi Shimizu. When a prospective house buyer, Peter Spencer (John Cho), visits a house that's on the market, he is attacked by something sinister. Frightened and confused, he reports the incident to Detective Muldoon (Andrea Riseborough). Muldoon, who already has several cases that she's working on involving brutal murders, tries to piece together exactly what lurks in the ominous home.

Upon further investigation, as Muldoon suspects the harrowing incidents may be linked together, she fears something may have followed her home.