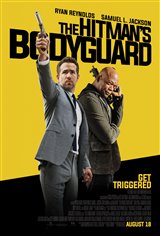 Boydguard Michael Bryce (Ryan Reynolds) was once a Triple A-rated executive protection agent, but his credibility took a dive when he lost a client to a sniper. He's coerced by his ex-girlfriend, an Interpol agent, to take on a new client when her team fails at the task. Michael has to deliver the world's most wanted hitman, Darius Kincaid (Samuel L. Jackson), to the International Court of Justice in The Hague to testify against a cruel dictator (Gary Oldman).

There's one major problem — the two quickly realize they can't stand each other. Darius doesn't listen to a word Michael says, which puts them both in danger. But they have to learn to put their differences aside, because they have just 24 hours to get to The Netherland in one piece, or the case is thrown out of court.