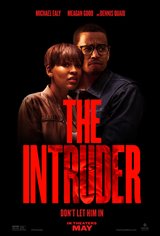 Young married couple Scott (Michael Ealy) and Annie Russell (Meagan Good) buy a beautiful Napa Valley house on several acres of land from an older gentleman named Charlie Peck (Dennis Quaid). He reveals that his great-great grandfather built the home and that he has lived in the house his entire life.

After they move in, it becomes apparent that Charlie isn't quite ready to let go of his old house, as evidenced by his constant visits. He mows the lawn and questions changes made to the home by the Russells. Though Scott is annoyed by the man's constant presence, Annie sympathizes and begins to befriend him.

Seemingly unable to distance Charlie from his home and his wife, Scott's apprehension and suspicions of the former home owner are only heightened when he learns from a local that Charlie's wife died by suicide, using Charlie's shotgun.

Scott then uses the resources available to him to uncover the darker secrets of Charlie's past that make it all the more clear that Annie is in grave danger.