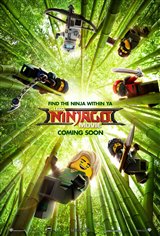 Six seemingly ordinary teenagers who attend high school by day are secret ninja warriors by night. Trained by kung fu master Wu (Jackie Chan), they use their skills and remarkable fleet of mechs to defend their island home, called Ninjago, from the Worst Guy Ever — evil warlord Garmadon (Justin Theroux), who also happens to be the dad of one of the teens.