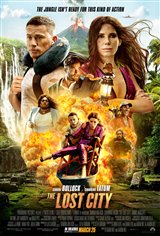 Reclusive romance novelist Loretta Sage (Sandra Bullock) isn't pleased with how her current book turned out and when asked to promote it, she's not happy about sharing the stage on a book tour with her cover model Alan (Channing Tatum).

When he gets all the attention from the mostly female audience, she decides it's time to leave, but on her way out, an eccentric British billionaire named Abigail Fairfax (Daniel Radcliffe) kidnaps her, thinking Loretta can translate the clue he has in an ancient language, that will lead him to a lost treasure. Determined to prove he can be a hero in real life and not just on the pages of her books, Alan, who has feelings for Loretta that are not reciprocated, enlists ex-Navy Seal Jack Trainer (Brad Pitt) to help him rescue her.