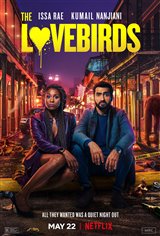 Jibran (Kumail Nanjiani) and Leilani (Issa Rae) are a couple going through a rough patch. They's even considering breaking up, but that has to be put on hold when they're driving one day and a cyclist falls into their windshield, then gets up and speeds off on his bike. Not only that, but a man claiming to be a police officer jumps into their car, saying the cyclist is a criminal, and he has to catch him.

However, when he catches up to the cyclist, with Leilani in the passenger seat and Jibran in the back seat, the so-called police officer runs him over. Then backs up over him. Then runs over him again. Then jumps out of the car and takes off.

Horrified, Jibran and Leilani get out of the car and as they look at the remains of the cyclist, they share the notion that the man in the car was definitely not a police officer. When two witnesses arrive and call 911, they tell emergency services that Jibran and Leilani hit the cyclist. In a panic, the two run away, but not before they've revealed their names. Now, in order to escape being arrested for a crime they didn't commit, they have to find the perpetrator and clear their names.