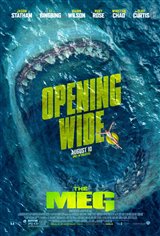 A deep-sea submersible is trapped with its crew at the bottom of the Pacific Ocean after being attacked by a prehistoric 75-foot-long shark known as the Megalodon. Chinese oceanographer (Winston Chao) recruits expert deep sea rescue diver Jonas Taylor (Jason Statham) to save the crew from this threat.