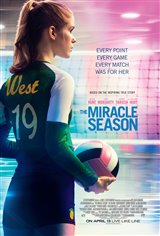 A team of champion female high school volleyball players, led by their caring coach Kathy Bresnahan (Helen Hunt), suffers a tragic loss when their star player, Caroline "Line" Found (Danika Yarosh), is killed in a crash when she loses control of her moped and hits a tree.

Heartbroken, the West High team has trouble moving forward. Kathy appoints Kelly (Erin Moriarty), Line's best friend, to be captain, but the girls need to pull it together in Line's memory if they want to be State champions for the second year in a row.

Based on a true story.