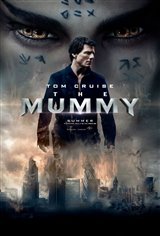 An ancient princess (Sofia Boutella) is thought to be safely entombed in a crypt deep beneath the harsh desert. Having had her destiny wrongfully robbed from her while she was alive, the princess is awakened in contemporary times and unleashes a fury that defies human understanding and an evil that has been brewing over millennia.

Her terror knows no bounds, crossing country lines throughout the Middle East and even impacting those in London. While in England, she encounters an ex-soldier (Tom Cruise), who's been enlisted to help end her cruel crusade.