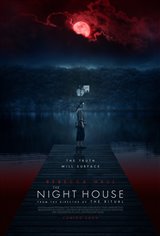 Beth (Rebecca Hall), a schoolteacher, lives alone in the home her late architect husband Owen (Evan Jonigkeit) built on the shores of an idyllic New York lake. However, after 14 years of marriage, he took his boat out onto the lake and shot himself in the head.

Completely blindsided by Owen's suicide, Beth begins to have violent dreams. A ghost seems to suddenly be present in the house, who knocks at doors and turns the stereo on to play "their song" in the early morning hours. Desperate for answers, she rummages through his things, and slowly uncovers disturbing secrets.