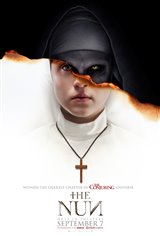 When a young nun dies mysteriously in Romania, the Vatican decides to send Father Burke (Demián Bichir) and a novitiate to investigate the death in the abbey.