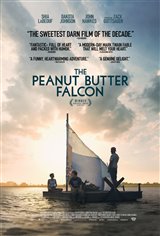 Zak (Zack Gottsgagen), a young man with Down syndrome, runs away from a residential nursing home with the help of his crochety roommate (Bruce Dern), to follow his dream of attending a professional wrestling school run by his idol, Clint (Thomas Hayden Church), a.k.a. The Salt Water Redneck. Eleanor (Dakota Johnson), the volunteer who was in charge of Zak, goes after him to bring him back.

However, Zak meets up with a drifter named Tyler (Shia Labeouf) and convinces him to let him tag along, and soon, the two become friends. Tyler, who just lost his brother, decides to help Zak, and teaches him essentials such as how to swim and shoot. He also promises to drop Zak off at The Salt Water Redneck's wrestling school. The two build a raft and set off on their way.