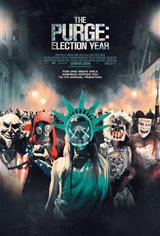 Expanding upon the explosive universe introduced in the first two Purge films, The Purge: Election Year follows police sergeant Leo Barnes (Frank Grillo) two years after he decided not to kill Warren Grass, the man who murdered his son in a drunk-driving accident.

Leo is now head of security for Senator Charlene Roan (Elizabeth Mitchell), front runner for the next presidential election, due to her vow to eliminate the Purge. Her revolutionary views, however, aren't shared by some higher-ups in the government. Now Leo and Charlene are cast out into chaos at the hands of the New Founding Fathers of America and must fight to survive alongside a group of anti-Purge rebels.