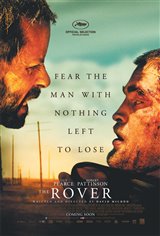 A decade after the downfall of the western economic system, Australia has become a dangerous and lawless wasteland. Eric (Guy Pearce), who has left everything and everyone behind, travels from town to town searching for signs of life. Then, one day Eric’s last and most precious possession — his car — is stolen by a gang of vicious bandits.

As they're making their getaway, the thieves abandon Rey (Robert Pattinson), their wounded partner in crime. Eric sets out to reclaim his car and forces Rey to help him track down the men who left him for dead in a desert.