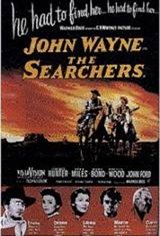 Ethan Edwards, an embittered veteran, returns to Texas after the Civil War and discovers that Comanche Indians have killed his family and kidnapped his niece. Along with Martin Pawley, who was adopted by the Edwardses after his own parents were killed by Comanches years earlier, Ethan sets out to find his niece, Debbie. The movie's title refers to the duo's five year search for the young woman, and their struggle to rescue her once she is adopted by the tribe and married to Chief Scar.