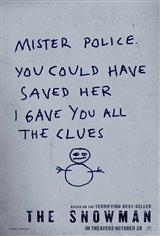 Harry Hole (Michael Fassbender) is the lead detective of an elite crime squad that's investigating the disappearance of a woman whose pink scarf is mysteriously found wrapped around an ominous-looking snowman.

While uncovering information about the case, he begins to suspect that an elusive serial killer may be at work again. He comes to the realization that if he wants to prevent another murder from occurring before the next snowfall, he'll have to connect decades-old killings.