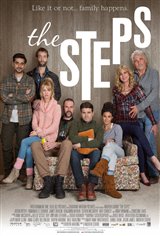 Uptight New Yorker Jeff (Jason Ritter) has just lost his job. When he and his party-girl sister Marla (Emmanuelle Chriqui) are invited to come for a visit to their dad's (James Brolin) new lake house in Canada, it's a welcome diversion. Until they realize they're going to have to spend time with his new cocktail waitress wife (Christine Lahti) and her three adult sons.

They also discover they've been invited for a specific reason. Their father and his new wife want to adopt a little Chinese girl, and would like their real kids to pretend to be a loving family by Monday, when a social worker is coming to interview the prospective family. Naturally, Jeff and Marla are less than thrilled by the prospect.

Canadian Connection: Filmed in Ontario. The director grew up in British Columbia and several cast members are Canadian.