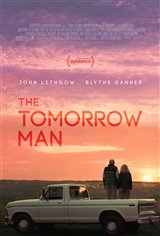 When Ed Hemsler (John Lithgow) becomes instantly smitten with Ronnie Meisner (Blythe Danner), he takes a risk and asks her out on a date. As the two get to know each other they begin to learn what each of them is about. Ed is a man fixated on the future, with a security bunker prepared with all the necessities to survive an inevitable cataclysmic event he believes is coming.

Ronnie, on the other hand, is a woman trapped in the past following the loss of her daughter. Standing opposite each other, their relationship will help each other turn their focus on the here and now.