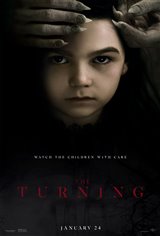 Kate (Mackenzie Davis), a young governess, is hired by a man who has become responsible for his young nephew Miles (Finn Wolfhard) and niece Flora (Brooklyn Prince) after the deaths of their parents.

Though Kate is able to befriend young Flora, she is met with a cold and seemingly contentious reception by her older brother Miles. As Kate begins to explore more of the mansion she begins to experience odd occurrences that put her on edge.

She quickly becomes convinced that the old country mansion in Maine where they live is haunted, and that the orphans are harboring dark secrets in this modern take on the Henry James' 1898 novella The Turn of the Screw.