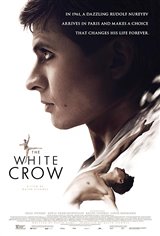 Despite being raised in poverty, when Rudolf Nureyev (Oleg Ivenko) began training for the ballet at 17 following WWII, it immediately became clear that he had immense talent. Ballet master Alexander Pushkin (Ralph Fiennes, who also directs) believes in Rudolf's talent so much that he allows the boy to live with him and his wife, Xenia (Chulpan Khamatova). Rudolf soon becomes famous throughout the Soviet Union.

When the renowned Kirov Ballet travels to Paris on a tour in 1961, it's Rudolf's first time outside the Soviet Union and he drinks in the city's culture. He's followed everywhere by KGB agents, who have been assigned to make sure the dancers don't try to defect. Rudolf ignores them, as well as his curfews, and makes friends with Parisian socialites such as Clara Saint (Adèle Exarchopoulos).

Rudolf comes to love the taste of freedom so much that he decides to take a chance and make a break for it, despite the intense KGB scrutiny.

Inspired by the book Rudolf Nureyev: The Life, by Julie Kavanaugh.