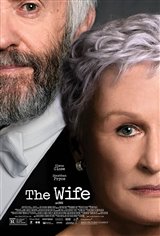 In 1993, Joe Castleman (Jonathan Pryce) is told he is going to be awarded the Nobel Prize for literature in honor of his career. His devoted wife, Joan (Glenn Close), accompanies him to Stockholm for the award ceremony, where she meets a journalist, Nathaniel (Christian Slater). Nathaniel, hoping to write a biography on Joe, presses Joan for details of his life and information about when the two first met.

In the late 1950s, Joe was a creative writing professor and Joan was his student. The two began a passionate affair that would lead to a 40-year marriage in which Joan sacrificed her own writing talent to support that of her husband.

Back in 1993, Joan begins to question her life choices leading up to this point, particularly excusing his infidelities and abandoning her own dreams and ambitions for the sake of his. Soon her support for his Nobel Prize sours as she sees it to be the epitome of every sacrifice she has ever made in order for Joe to succeed.