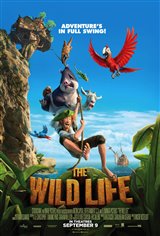 When a human named Robinson Crusoe (Yuri Lowenthal) and his dog Aynsley (Doug Stone) wash up on the shores of their tiny tropical island after a tropical storm, Tuesday (David Howard), an outgoing parrot and his quirky group of animal friends are initially repulsed by his furless appearance. However, they soon come to realize he's harmless and over time, they make friends with him.

When villainous pirates come calling and threaten the safety and harmony of the island paradise, Crusoe and his new pals discover the true power of friendship against all odds.