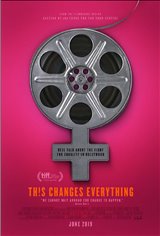 This feature-length documentary goes behind the scenes of Hollywood, with well-known actors and directors discussing one of the most frustrating dilemmas in the entertainment industry – the underrepresentation and misrepresentation of women due to systemic misogyny, which finds women inconsequential, unless they're being used as ornamentation.

The film gathers data, such as the fact that less than 16 percent of the members of the Directors Guild of America are female and only 15 percent of the top-grossing films of 2018 were written by women. Combined with the obvious sexism and discrimination that has plagued the movie and television industry throughout history, this also shines a light on the #MeToo movement — which was desperately needed.

The Geena Davis Institute on Gender in Media has done exceptional work in showing the eye-opening numbers that prove women aren't being taken seriously and are being denied work behind — and in front of the camera. Ms. Davis is joined on camera by the likes of Meryl Streep, Jessica Chastain, Cate Blanchett, Reese Witherspoon, Sharon Stone, Judd Apatow, Alan Alda, Shonda Rhimes and many more in this timely exposé.