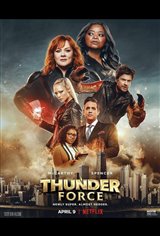 In a world filled with criminals and supervillains, scientist Emily Stanton (Octavia Spencer) has developed a formula designed to give ordinary people superpowers. One day, when her childhood best friend Lydia (Melissa McCarthy) comes to visit her at her lab, she is accidentally injected with one of Emily’s formulas, giving her superhuman strength. Lydia is not the only super-powered human, as Emily also has the ability to turn invisible.

With Lydia's new superpowers, the two of them form a new superhero team, Thunder Force. Together, they must fight the villains that litter the world, and in the process save the city of Chicago from a new criminal, The King (Bobby Cannavale) and his team of super-powered Miscreants.