To All the Boys I've Loved Before (Netflix) 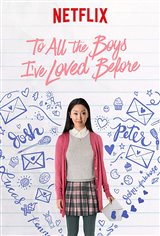 Lara Jean (Lana Condor) is an introverted high school student. Whenever she has an intense crush on a boy, she writes a letter to the boy and safely stores it in a box in her closet.

One day, Peter tells her that it's probably never going to happen. When she sees the letter she wrote to him in his hand, she faints. She runs home and finds out that her secret love letters to every boy she's ever fallen in love with have been mysteriously mailed out.