Tom Petty, Somewhere You Feel Free: The Making of Wildflowers 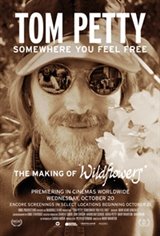 Tom Petty, Somewhere You Feel Free: The Making of Wildflowers offers a unique take on the Petty legacy, diving deep into a condensed period of creativity and freedom for the legendary rock star. Capturing the period of 1993-1995, during which he created his seminal and most emotionally raw album Wildflowers, the unvarnished look at Petty features never-before-seen footage drawn from a newly discovered archive of 16mm film as well as new interviews with album co-producers Rick Rubin and Heartbreaker Mike Campbell, along with original Heartbreaker Benmont Tench.