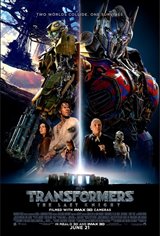 Optimus Prime seeks redemption for destroying his home and an unlikely alliance made up of Cade Yeager (Mark Wahlberg), Bumblebee, an English Lord (Sir Anthony Hopkins), and an Oxford Professor (Laura Haddock) must go to battle against the Transformers for control of the planet. The secret to defeating the powerful machines lies buried in the secrets of the past and embedded in the history of Transformers on Earth.

As tensions come to a head and each side vies for domination, the hunted become heroes, heroes become villains, and there's only room for one world to survive: ours or theirs.