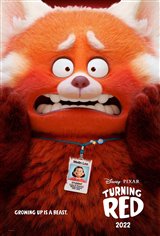 A 13-year-old girl named Mei Lee (Rosalie Chiang) is a typical middle-schooler, except for the fact that she suddenly "poofs" into a giant red panda when she gets too excited (which is practically ALWAYS). When she discovers her mother Ming (Sandra Oh) spying on her from behind a tree just outside her classroom, Mei Lee is humiliated in front of her classmates.

When Mei Lee's horror turns to panic, she "poofs" in front of everyone. In her new form, Mei Lee escapes the classroom and wanders the streets of Toronto in an effort to cope with her emotions and her overbearing mother.