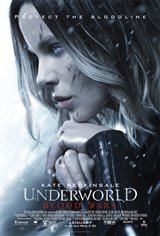 In the fifth installment of the Underworld franchise, Selene (Kate Beckinsale) returns while the war between Vampires and Lycans rages on. With her loved ones dead after being hunted down by enemies, Selene's involvement in the war is personal. She’s been relentlessly targeted by the Lycans and betrayed by the Vampires, but finds allies in David (Theo James) and Thomas (Peter Andersson), who inform her that the new leader of the Lycan clan, Marius, is in hot pursuit of her. In their fiendish plot, the Lycans plan to use her blood to make them invincible to the vampires and their Death Dealers.

Selene fights to end the eternal war, even if it entails making the ultimate sacrifice.