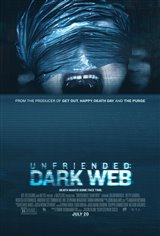 Unfriended: Dark Web is a sequel to the 2015 movie Unfriended.

A group of 20-somethings gather once a week via Skype to play a round of Cards Against Humanity. One of the group, Matias (Colin Woodell), is a programmer who has taken a laptop from a Lost and Found because he needs a faster machine to help him build ASL translation software so he can communicate with his deaf girlfriend Amaya (Stephanie Nogueras).