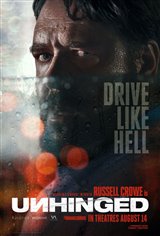 Freelance hairdresser Rachel (Caren Pistorius), a young mother with an adolescent son, Kyle (Gabriel Bateman), is having a rough day. She slept in and now not only is Kyle late for school, but her first client of the day has called her as she's driving and fired her for tardiness.

Not only that, but her salon closed down recently, and her lawyer just informed her that her estranged husband wants the house she and Kyle live in as part of the divorce settlement.

When she pulls up behind a truck, the driver doesn't notice when the red light turns to green. She waits for a moment, then honks in frustration and finally, as the light is turning yellow, pulls out around him and heads for the freeway.

When she's caught in a traffic jam up ahead, the man (Russell Crowe) in the truck pulls up beside her and asks for an apology. Rachel refuses, not knowing that this man is completely unhinged. He's just gone through a divorce himself, and has a major anger problem. He decides he's going to make sure Rachel has the worst day of her life.