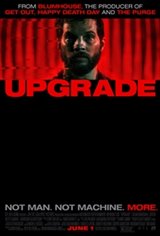 Grey Trace (Logan Marshall-Green), an ultra-retro vintage car customizer, considers himself as a technophobe. He lives in a utopian near-future when computers control nearly everything — from cars to crime surveillance. When he completes his restoration of a car for a high-tech executive, he has to deliver it. His wife, Asha (Melanie Vallejo), follows him in her driverless car.

On their way home, their driverless car is electronically hijacked and Asha is killed, while Grey is left a quadriplegic. When the police have no leads on the crime three months later, Grey decides to investigate it himself, but his state leaves him almost helpless.

However, billionaire technologist Eron (Harrison Gilbertson) offers him an experimental cure — a mini control box, called STEM, that will be surgically installed in Grey’s spine, making him able to walk again. Grey's thrilled to be able to walk again, but he soon discovers that the chip has a voice and a mind of its own.