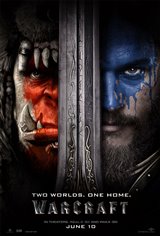 The realm of Azeroth has enjoyed peace for many years, but now it may be on the brink of war when they are faced with a fearsome race of invaders: Orc warriors looking for another home when their world dies.

As a portal opens to connect the two worlds, one army faces destruction and the other faces extinction. From opposing sides, two heroes are set on a collision course that will decide the fate of their family, their people and their home.

It's up to Sir Anduin Lothar (Travis Fimmel) to protect King and country from the invading orcs. Sir Anduin encounters Garona (Paula Patton), a half human, half orc. As war threatens to destroy both humans and orcs, Garona must decide where her loyalty lies.