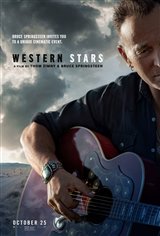 In between each of the songs, Springsteen muses on the inspiration for each of his songs. He's joined on stage by his longtime bandmate and wife of 27 years, Patti Scialfa.

Meanwhile, we're also treated to home-movie footage from Springsteen's family collection, including clips of himself and Patti on honeymoon, joking around at a log cabin.

Finally, The Boss offers up an encore: a rousing version of Glen Campbell’s “Rhinestone Cowboy.”