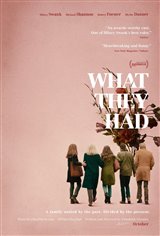 Bridget (Hilary Swank) returns home to Chicago to see her mother Ruth (Blythe Danner), who wandered off during a snowstorm. Ruth is suffering from Alzheimer's, but Bridget's brother Nicky (Michael Shannon), who lives in Chicago, doesn't have the patience to deal with his mother's failing memory. He also resents all the errands he has to do for his parents.

Nicky thinks Ruth belongs in a nursing home, but his father Burt (Robert Forster) refuses. He has endless patience for his wife, calling her "my girl." Burt tells Bridget love is commitment and that his marriage vows included the phrase "in sickness and in health, till death do you part." Burt is still in love with Ruth, and no matter what, he humors her, even when she announces she's planning to have another baby. Meanwhile, Bridget's own marriage is falling apart as she realizes she doesn't feel the same commitment that her parents have.
Director:
Elizabeth Chomko
Studio:
Elevation Pictures
Producer(s):
Albert Berger, Alex Saks, Bill Holderman, Keith Kjarval, Ron Yerxa, Sefton Fincham, Tyler Jackson
Cast:
Hilary Swank, Michael Shannon, Blythe Danner, Robert Forster, Taissa Farmiga, Josh Lucas
Writer(s):
Elizabeth Chomko
Official Site:
whattheyhadmovie.com