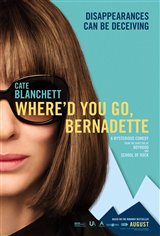 Bee (Emma Nelson), 15, maintains a perfect report card in order to go on a trip to Antarctica, like her mother, Bernadette (Cate Blanchett) and father, Elgin (Billy Crudup), promised. But when things in Bernadette's life spin out of control, she disappears without a word.

Not knowing if she's alive or dead, Bee and Elgin (Billy Crudup) go on a search for Bernadette, believing she may have gone to Antarctica alone. Along the way, Bee discovers information about her mother's troubled past.

Based on the novel by Maria Semple.