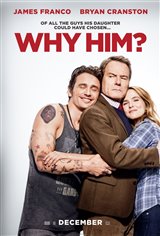 A straight-laced, overprotective dad named Ned (Bryan Cranston) and his family travel on holiday to visit his daughter Stephanie (Zoey Deutch), who's studying at Stanford. There, Ned meets his worst nightmare: Stephanie's new socially awkward billionaire boyfriend Laird (James Franco), who is by far the opposite of Ned's envisioned perfect suitor.

Finding him wildly inappropriate for his daughter, Ned sees Laird as obnoxious, rich, and worst of all, tattooed. When Ned discovers that Laird is planning to propose to Stephanie, his panic and one-sided rivalry turns into a mission to stop the engagement before it happens.