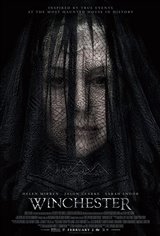 Wanting to get a fresh start, Sarah moves west to California to be with family and begins construction on an enormous mansion, hoping to appease the spirits and keep them at bay. But when San Francisco psychiatrist Eric Price (Jason Clarke) is sent to the estate to evaluate her state of mind, he discovers that her obsession may not be so insane after all.