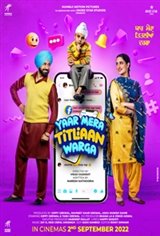 After six years of marriage, a couple come to the realization that they're bored with each other. To spice things up, they both open fake Facebook accounts. But things go humorously sideways when they accidentally befriend each other on FB.