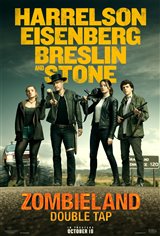 When Little Rock runs away with Berkeley, a pacifist she just met, the team has to band together to bring her back. They must also face new evolved zombies, who are faster, deadlier and much more difficult to kill.