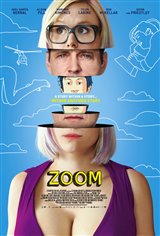 Emma (Alison Pill) is a comic-book artist who works in a factory that manufactures sex dolls, but it's messing with her head. She makes a rash decision that she later regrets when she tries to get closer to the plastic fantasy image that surrounds her.

Luckily, Michelle (Mariana Ximenes), the aspiring novelist writing Emma's story, gives her a way out. In turn, Emma controls the story of Edward (Gael García Bernal), the successful and confident action-movie director at the centre of the comic book she's drawing. In a cruel joke, Emma takes her pen to the root of this man's vanity, shrivelling his confidence instantly.

He begins to struggle with his film about Michelle, a Brazilian model living in Toronto and trying to write a novel about a cartoonist. In a bid to escape the fashion world and immerse herself in her writing, she returns to Brazil, finding a small fishing village where the pressure to complete her novel leads her to Alice (Cláudia Ohana), a hotel owner who changes her life.