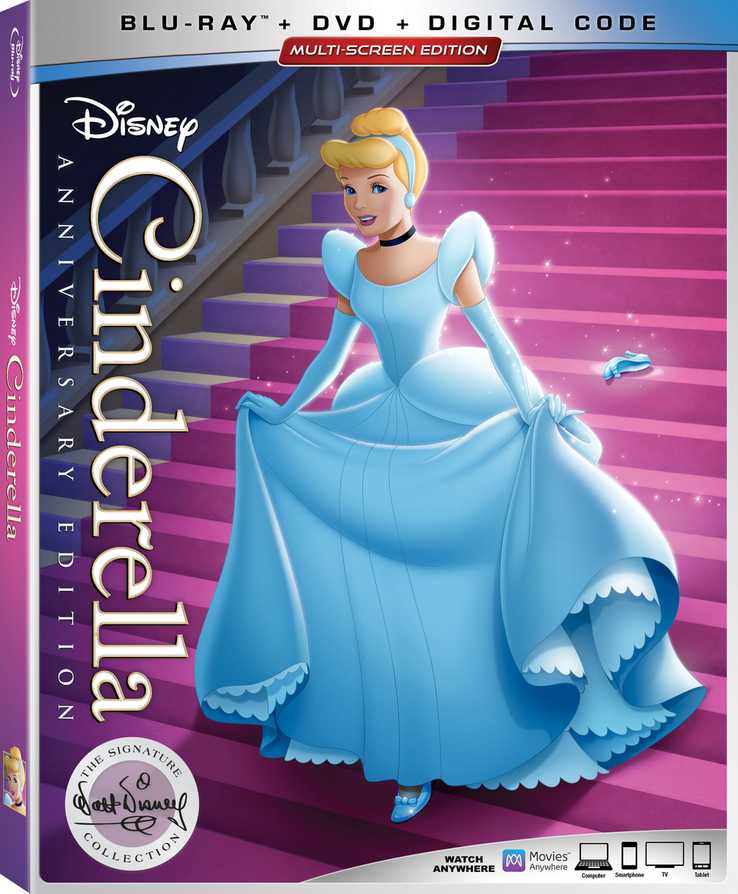 As part of the Disney Signature Collection and in honor of Cinderella's 70th anniversary, Disney has released a special Cinderella Anniversary Edition. Cinderella aficionados can now enjoy two hours of new bonus extras.

Cinderella is one of those beloved Disney animated films that become an essential part of your childhood. It's a classic film about love, family and friendship.

When Cinderella's mother dies, her father, a wealthy aristocrat, decides to remarry, so someone can look after his daughter. His new wife, Lady Tremaine, already has two daughters from her previous marriage. She shows her cruel nature when the aristocrat dies.

Jealous of Cinderella's beauty, her stepmother and stepsisters force her to become the maid, giving her chores day in and day out.

When the King announces he is throwing a ball to find a suitable wife for his son Prince Charming, all the single women in the kingdom start getting ready. Cinderella, however, is given extra chores by her stepmother to make it almost impossible for her to attend the ball.

Just as she's about to give up, Cinderella's fairy godmother appears to make her wishes come true, creating a gorgeous ball gown and glass slippers to turn Cinderella into a stunning princess until midnight. This is one fairy tale that never gets old no matter how many times you watch it. It gives you goosebumps, it makes you sing out loud, and most importantly, it reminds you to never stop believing in your dreams. ~Marriska Fernandes

In Walt’s Words: The Envisioning of Cinderella – In addition to the original film, voice actors offer commentary about their meetings with Walt Disney and his team. This is further supported with visuals of the storyboards, behind-the-scenes photos and transcripts.

Try This Trivia on for Size – Actresses Ruth Righi and Ava Kolker, from Disney Channel's Sydney to the Max, reveal fun facts about the film while testing your knowledge of Cinderella.

From Rags to Riches: The Making of Cinderella – This featurette includes animator interviews as they discuss the making of the film and its significance in the Disney franchise.

The Cinderella That Almost Was – We see some of the storyboards and production art from previous attempts to adapt this story to animation.

The Magic of the Glass Slipper: A Cinderella Story  – Legendary shoe designer Christian Louboutin shows how he got his inspiration for the glass slipper he designed.

The Real Fairy Godmother – Here we get to know more about who the role of the fairy godmother was based on.

Alternate Opening Sequence – You might enjoy these different takes on the film's opening scenes.

Storyboard to Film Comparison: Opening Sequence – An insight as to how much the storyboards contribute to the final version of the film, giving us a look at the "A Dream is a Wish Your Heart Makes" sequence.

From Walt’s Table: A Tribute to the Nine Old Men – Walt Disney’s team of animators are seated at a roundtable with animators and directors who they mentored.

The Art of Mary Blair – A short featurette on animator Mary Blair and her work in the film.