Game of Thrones Season 8, Episode 6 finale recap/review Published By Tribute on May 20, 2019 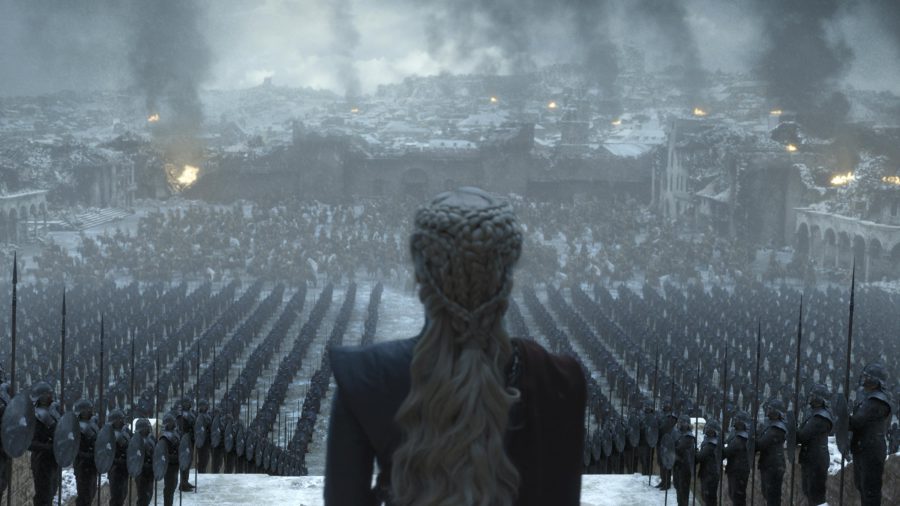 Lord of Light! Come to us in our darkness. We offer you a recap of last night's episode of Game of Thrones. Take them and cast your light upon us in the comments section. But be warned, for the review is dark and full of SPOILERS.

Do you remember all of those prophecies about a "Prince That Was Promised? He would save humanity from the Long Night with a sword named "Lightbringer?"

He was part of the Lord of Light's plan?

All swept under the rug!

Instead, we got this.

Daenerys (Emilia Clarke) gives a tyrannical speech to the Unsullied and Dothraki about "liberating" the entire world. Given that Dany's definition of liberation is burning a million people to death, Jon Snow (Kit Harington) is rightfully creeped out.

He and Grey Worm (Jacob Anderson) nearly kill each other after Jon demands Grey Worm not execute prisoners of war. According to Grey Worm, he’s just following Dany’s orders.

Tyrion (Peter Dinklage) is in pieces. He's discovered the corpses of his siblings Jaime (Nikolaj Coster-Waldau) and Cersei (Lena Headey). He is not only devastated, but angry. After all, did they not ring the bells of surrender?

Tyrion resigns as Hand of the Queen, and Daenerys imprisons him for setting Jaime free.

While Tyrion is in prison awaiting execution, Jon pays him a visit. The two discuss their Queen's massacre, as well as the fascist speech she just gave. Tyrion implies Jon has no other choice: kill Daenerys or watch the rest of the world burn.

Meanwhile, Daenerys is in the "throne room," or at least what's left of it. Right before she can sit on the Iron Throne, Jon arrives. The two speak candidly about the battle that took place in last week's episode.

When it becomes clear to Jon that Daenerys intends to massacre millions more if they fail to instantly surrender to her, he tearfully and lovingly kisses Dany. Jon pledges to Daenerys she will always be his queen... and then stabs her in the heart with a dagger mid-kiss.

Daenerys Stormborn of the House Targaryen, First of Her Name, the Unburnt, Queen of the Andals and the First Men, Khaleesi of the Great Grass Sea, Breaker of Chains, and Mother of Dragons... is dead.

Drogon, Dany's dragon, flies into the throne room. Jon doesn't run or hide. Jon is ready to be burned alive by Drogon, but to Jon's surprise, the dragon fire blasts over his head and melts the Iron Throne into molten liquid.

I guess Drogon understands metaphors? Otherwise why else would he have attacked the Throne?

Drogon grabs Dany's body and proceeds to fly across the Narrow Sea.

Fast forward to a few weeks later, and all of the remaining Lords of Winterfell have gathered in King's Landing. Tyrion is taken out of his cell to discuss with these Lords. They need a monarch, but who to choose?

Samwell Tarly (John Bradley) boldly suggests a democratic approach: let every citizen of Westeros, regardless of social class, elect a King. There's a brief pause. "Oh my goodness, is Samwell Tarly going to invent democracy? THAT'S HOW THIS SHOW ENDS?!" I thought to myself.

But alas, the other lords, and even Sansa (Sophie Turner) and Arya (Maisie Williams), laugh at the suggestion. Remember folks, this is still a "medieval" setting. The other lords mockingly suggest they might as well let horses vote.

Brandon Stark (Isaac Hempstead Wright) is named King of the Six Kingdoms (Sansa insists the North be independent) by the Lords after Tyrion suggests he is best fit to rule. After all, Bran's story is the most compelling, at least according to Tyrion.

Is it though? Surely Jon Snow's story is more compelling. That's why the ENTIRE FRANCHISE HAS JON POISED AS THE HERO.

And yet, Jon Snow must be punished for killing Daenerys. The Unsullied demand it. Jon is to be sent to the Wall to serve once more in the Night's Watch. Sansa is Queen of the North, and Arya... gets on a boat to explore new territories that have yet to be discovered. OK....

Arya's story was compelling because it was like a Homeric voyage. A poor girl just trying to get back home to safety after her father was beheaded. Seeing Arya develop into a fierce warrior along the way was nothing short of incredible to watch. And yet, so was seeing her love blossom with Gendry (Joe Dempsie).

On that note, so was seeing Meera (Ellie Kendrick) fall for Bran. I mean come on, NONE of the Starks get to finish the series in love?

This whole series exists because of Rhaegar and Lyanna's forbidden love. I know it's "played out," but we need love stories to create emotional investment.

Are you really telling me you wouldn't have wanted to see Meera and Bran together?

The series ends with a small council meeting. Ser Bronn (Jerome Flynn) is the Master of Coin and Lord Paramount of the Reach, while Ser Davos (Liam Cunningham) is Master of Ships. Brienne (Gwendoline Christie) is Lord Commander of the King's Guard, and Sam is Grand Maester.... what? Sam is married to Gilly (Hannah Murray). They have a kid together. Maesters can't have a wife or kids.

Also, I'm pretty sure Sam swore an oath to the Night's Watch to not hold any land or TITLES. Grand Maester of the Six Kingdoms?! OK, why not?

Drogon has been spotted in the East, but the Westerosi are choosing to ignore him in lieu of shipbuilding.

And how could I forget. Tyrion is Hand of the King. Not because he wants to be, but because Bran wants Tyrion to spend the rest of his life undoing all of the damage he did by counseling Daenerys.

Bran has helped put a book together called "A Song of Ice and Fire," chronicling the War of the Five Kings. Meta humor in Game of Thrones? I'm not sure how I feel about that.

The Unsullied have left Westeros. They are sailing to Naath, led by Grey Worm. Poor Grey Worm. He and Missandei (Nathalie Emmanuel) had planned to retire there together.

What happened to the Dothraki? How are they going to adjust to life in Westeros?

The final shot of the series is Jon Snow, reunited with Ghost, leading the free folk beyond the wall with Tormund (Kristofer Hivju). Where are they going? Why? I guess it's a mystery.

Call me a sucker for romance, but I think the one thing preventing this show from being truly great was the lack of romantic love in season 8.

I found it curious that Tyrion admitted to Jon that he loved Daenerys, and that his love for her was blinding.

There's no humanity left. That small council meeting was SO dull.

The catalyst of this entire series was the ending of episode one, where Jaime famously said "the things we do for love."

If anything, that could be the theme of this entire series. It would certainly apply to Rhaegar and Lyanna. It would also apply to almost every other character you can think of.

And here's the real hypocrisy. This show has always been EXTREMELY sexual. I've even jokingly referred to it as "dragon-porn." Love and sex have always been crucial to this show, and yet the Stark children don't get to fall in love and be happy? Instead they have to live cold, boring lives rooted in efficacy rather than affection?

"Why do they need to fall in love? Sansa, Brienne and Arya are feminist heroes! Are you saying they need a man?!"

Yes, that is precisely what I'm saying.

Why? Because all of these characters are amorous. Arya fell for Gendry, Sansa was boy crazy when we first met her as a 13-year-old and Brienne was clearly in love with Jaime.

A character like Yara (Gemma Whelan) is a great example of a strong female character who was never established as particularly amorous. No complaints here. She's in charge of the Iron Islands. She doesn't need a man.

Conversely, Jon Snow is an extremely loving person. Seeing him kill Daenerys was the final gripping emotional moment in this series. After that, it was all just boring plot. Hmmm, I wonder why....

So what can we take away from the series finale? What lessons are to be learned?

I'm going to paraphrase Tyrion and argue that stories are the best way to change minds. Our ancestors all knew this. The Torah is a collection of 613 laws. These laws, along with ancient Greek wisdom, are the foundation of western civilization.

However, the Torah is not a list of 613 laws. That would be boring. Instead it tells a story. One that continues to irrevocably alter lives nearly 6,000 years later.

So what has Game of Thrones taught us? It's simple really, and I alluded to it earlier: love makes people do some crazy stuff.

Catelyn Stark (Michelle Fairley) freed Jaime Lannister when he was a prisoner of war. All for the love of her children.

As much as I would have loved an alternate reality in which Rhaegar and Lyanna ruled the Realm together, this reality would have likely lead to death and destruction beyond even what Daenerys did.

Now that I think about it, maybe there is a silver lining to this ending. Bran is not driven by love, and he can't have children because he's a cripple (Bran the Broken is a rude name for him though).

The Lords have agreed all future kings will be elected by the Lords, and no royal offspring will have an automatic claim to the throne.

Perhaps this is for the best. Reason free from passion could be civilization's best hope for survival. Lest we forget, "the things we do for love." ~Yanis Khamsi